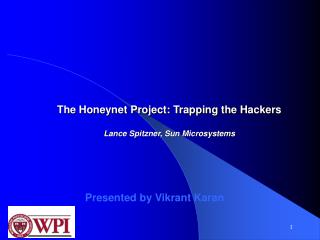 The Honeynet Project: Trapping the Hackers Lance Spitzner, Sun Microsystems. Presented by Vikrant Karan. Outline. The Honeynet Project Honeypots: Not just for bears anymore Different kinds of honeynets What the honeynet collects The legal ramifications of operating a honeypot Conclusion.

Karan Chanana - Karan A Chanana - Mr. karan a. chanana has been the chairman of the board of amira nature foods ltd.,

The Honeynet Project - . your speakers. the team members. overview. the honeynet project honeynets the enemy learning

Hackers - . what is a hacker?. a person who breaks into computers, but does no harm, usually for fun or just the

Thank You R Hackers of NYC - “never doubt that a small group of thoughtful, committed citizens can change the world.

Honeypot - . 서울과학기술대학교 jeilyn molina 121336101. definition. honeypot is the software or set of

Honeypots - . introduction. a  honeypot  is a trap set to detect, deflect, or in some manner counteract attempts at