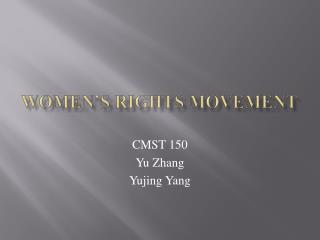 Civil Rights Movement - . the lbj years. 1964 civil rights act. once the act was implemented, its effects were far

Women s Rights in Iraq - Warm-up. agree disagree. . . i have traveled to iraq.i am myself, or have a close friend or

Inmates Rights Movement - The hands off" doctrine. prior to 1964prisoner as slave of state" and civilly

Women s Legal Rights - Synopsis. our group project is about the women's legal rights, which states the problems related

Women’s rights movement - . feminism. the equality of men and women with regard to politics, economics, etc. leaders.

WOMEN MOVEMENT - . by jennifer omorogbe-akpata and delia altamirano. what was a major goal of the movement?. there goals