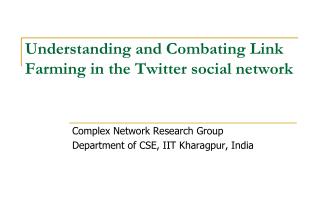 Understanding and Combating Link Farming in the Twitter social network

Understanding and Combating Link Farming in the Twitter social network

Informative Speech: What does it mean? - Reference link: https://myassignmenthelp.com/blog/informative-speech-topics/

Feudal Society in Europe - . medieval europe. why was feudalism necessary?. after the roman empire collapsed, europe had

Heat's Deadly Effects - . pre-quiz. prior to hurricane katrina, what was the deadliest type of extreme weather event to

Fourth Generation Warfare - . the history of terrorism as a strategy of political insurgency section 6. the sling and the