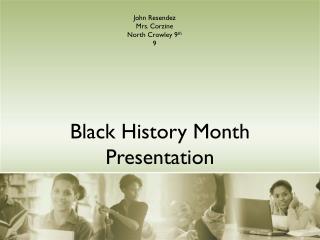 John Resendez Mrs. Corzine North Crowley 9 th 9. Black History Month Presentation. Introduction. -black history to me is a whole month dedicated to the African American people that has helped us in this present time. With out some of these people we probably wouldn’t be were we are today. Laparoscopic Appendectomy - . use, history and performance. by rob west. in this presentation:. contents about

Practical Applications in CWW - . any change prior to adverse action in month 1 will affect eligibility for month 2.

Phagocytic dysfunction - . a 7 months-old male infant was brought with a history of loose motions for 5 days and