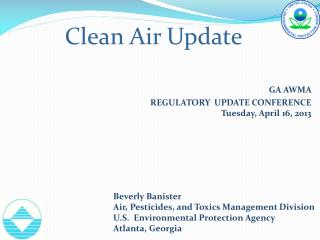 Clean Air Act Update - What i will talk about. a little about myselfohio and national associationsnational ambient air

Clean Air Act - 1963- established funding for the study and cleanup of air pollution, but there was no comprehensive

Clean Air Act - . a u.s. law that authorizes the epa to set limits on the amount of specific air pollutants that are