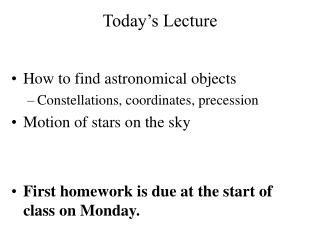 Today’s Lecture. How to find astronomical objects Constellations, coordinates, precession Motion of stars on the sky First homework is due at the start of class on Monday. How does one locate an object on the night sky?.

A lecture by : Dr. Pranav Pandya, MD Head – All World Gayatri Pariwar - Mind body relationship and its application to

BASIC IMMUNOLOGY - . samuel aguazim(md). immunology. today's lecture is going to summarize the whole course and there are