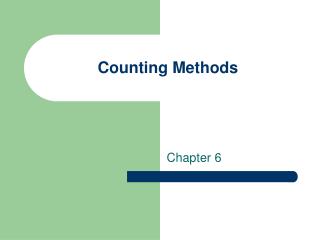 Counting Methods - . hw worksheet. i will be able to count different possibilities by drawing a diagram, making a list or

Counting Methods and Probability - . chapter10.1-10.3. 10.1 counting principles and permutations. determine how many

Chapter 10: Counting Methods - . counting by systematic listing. 10.1. one-part tasks: each item in the list is

Introduction to Counting Methods and Fundamental Counting Principal - . a nickel, a dime and a quarter are tossed. .