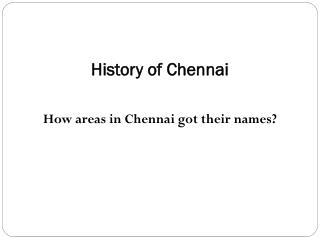 History of Chennai. How areas in Chennai got their names?. Egmore. Egmore is the English form of " Ezhumbur " the name of a pre-British era village situated on the northern banks of the River. Quick Facts. Bank of Maharashtra Chennai - All the 11 branches of bank of maharashtra in chennai here:

Chennai Tour: - Admire City For Its History And Cultures - The gateway of south india, chennai has lots to offer its

copiers in chennai, photocopier chennai - Sai baba business solutions is a firm specializing in the rental, dealer and

List Of Schools In Chennai - Do you like to study at top schools in chennai? then, sunbeam matriculation higher secondary

Overview of Hotel Savera, Chennai - Learn all the basic and essential information about hotel savera in

Alpha College of Engineering Chennai - Alpha college of engineering was established in the year 2006, at thirumazhisai,

Advantages of Modular Kitchen Chennai - Modular kitchen gives the trendy and stylish look to your home. nowadays many