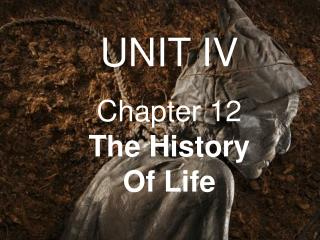 UNIT IV Chapter 12 The History Of Life. UNIT 4: EVOLUTION Chapter 12: The History of Life I. The Fossil Record (12.1) A. Fossils can form in several ways. 1. Permineralization - minerals carried by water are deposited around or replace the hard structure. Petrified wood.