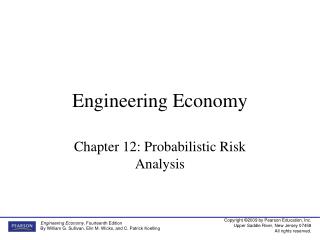 Engineering Economy. Chapter 12: Probabilistic Risk Analysis. The objective of Chapter 12 is to discuss and illustrate several probabilistic methods that are useful in analyzing risk and uncertainty associated with engineering economy studies. The FTC Engineering Notebook - . presented by: team unlimited, ftc0001 unlimited.syraweb.org. outline. what is the ftc

Engineering the Future of Civil Engineering - . raising the bar through education and licensure. putting 10 pounds of