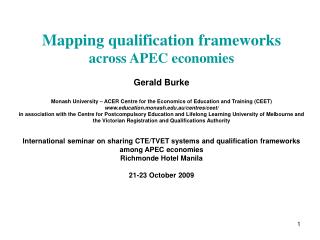 VET funding – past trends and future issues - . peter noonan gerald burke centre for the economics of education and

Monash University – ACER CENTRE FOR THE ECONOMICS OF EDUCATION AND TRAINING - . jobs: how young people are faring mike

Presented by: Anthony Harris Centre for Health Economics, Monash University - The determinants of pbac recommendations to

Economics 600 6:00pm-9:00pm - Markets, organizations, and the role of knowledge why do markets out perform command and