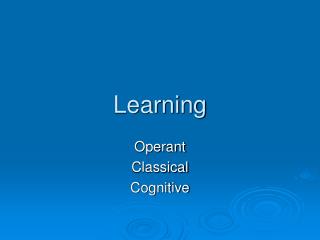 Learning. Operant Classical Cognitive. Learning is …. A change in behavior that results from a previous experience ( behavior can be observable or a thought). Factors that affect Learning (part of cognitive learning ). Feedback - must be descriptive rather than evaluative, timely,