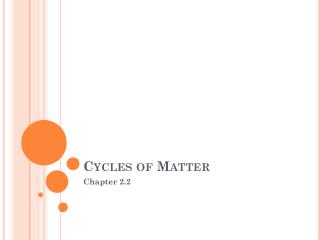 Cycles of Matter and Energy - . unit 9, lesson 2. laws of conservation. energy can neither be created nor destroyed, only

Cycles in Matter - . chapter 3.4. recycling in the biosphere. unlike the one-way flow of energy, matter is recycled

Biogeochemical cycles the movement (or cycling) of matter through a system

3-3 Cycles of matter - . recycling in the biosphere. unlike the one-way flow of energy, matter is recycled within and

Cycles of Matter - . cycling of matter. cycles in the biosphere. energy is transformed into usable forms to support the

3.3 Cycles of Matter - . objectives. describe how matter cycles among the living and nonliving parts of an ecosystem.

CYCLING OF MATTER - . what is biomass?. is biological material derived from living, or recently living organisms. . decay

The Cycling of Matter - . to understand how matter cycles through ecosystems, you must understand the cycling of organic

Cycles of Matter - . a handful of elements combine to form the building blocks of all known organisms. what are they ?

The Cycling of Matter &amp; Energy - . ecosystems. community of interacting organisms within a biome living in

Section 13-5 “Cycles ” - . write everything that is underlined. key concept : matter cycles in and out of an