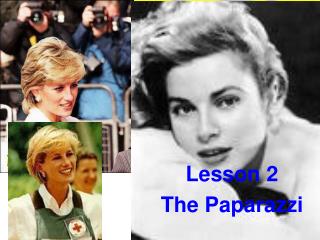 Lesson 2 The Paparazzi. Tell us. What do you know about the paparazzi?. They take photographs of famous people’s private lives. You will hear these words in the radio programme you are going to listen to. Match these words with their definitions. The Gloss and Shine Behind the Paparazzi - Paparazzi is a very common world made popular by the entertainment industry.

Planetary paparazzi: Our solar system - . by kiran nandi. a) phobos. this moon of mars is known as the ‘floating

Lesson 2 – The Hebrews - . focus questions: in what ways did the hebrew view of god mark a revolutionary break with the

Lesson 2 - 2 - . normal distributions. knowledge objectives. identify the main properties of the normal curve as a

Lesson 2 - . the end game: the objective of missions. missions: the church’s marching

Lesson 2 - What causes changes to earth’s landforms?. rocky coast: these tall rocks along the australian coast are sea

Lesson 2 - . eq: what type of factors may affect your health and decision making?. what is a “factor”?. an element