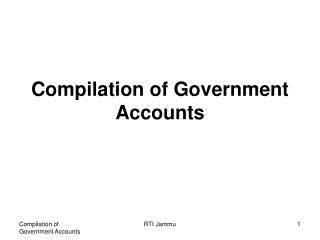 Whole of Government Accounts - . ian bulmer head of wga, government financial reporting. coverage. what is wga? why are

Chapter 8 Accounts Receivable - Receivables » refers to amounts due from individuals and companies. » are frequently

Accounts Payable - . processing an invoice. invoice received from vendor into accounts payable. does the invoice have a