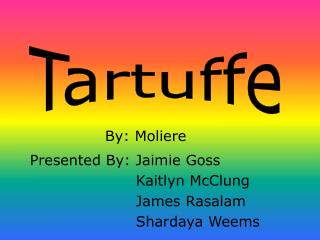 Tartuffe. By: Moliere. Presented By: Jaimie Goss Kaitlyn McClung James Rasalam Shardaya Weems. CHARACTERS. Madame Pernelle. Orgon’s mother Believed Tartuffe to be godly and should be respected as a saint

Jean-Baptiste Poquelin - . aka: moliere. “writing is a little bit like prostitution. first you do it for love. then you

Moli`ere - Tartuffe …. . moli`ere. “a learned fool is more a fool than an ignorant fool.”-moliere. moliere.