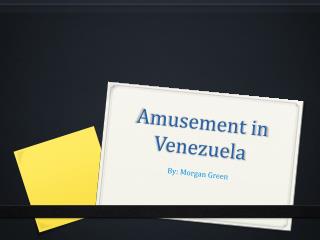 Amusement in Venezuela. By: Morgan Green. Recreation in Venezuela. There are several famous festivals you can attend in Venezuela. Carnaval is a yearly nationwide event that lasts for several days and begins just before Ash Wednesday.

All about Venezuela - . by:amyrlin mcdonald. state bird. venezuela’s state bird is the venezuelan tropical.it has

Amusement Park Webquest - Name: date:. amusement park webquest. use the internet to find the items listed on each

Something that Lasts - . {1 corinthians 9:25} everyone who competes in the games goes into strict training. they do it to

Lake Maracaibo - . located in venezuela, lake maracaibo is the largest lake in south america, covering an area of 5,150