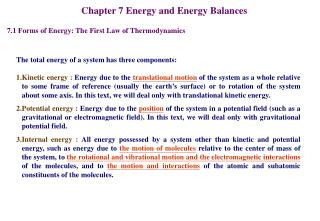 Chapter 7 Energy and Energy Balances. 7.1 Forms of Energy: The First Law of Thermodynamics. The total energy of a system has three components: 1.Kinetic energy : Energy due to the translational motion of the system as a whole relative Energy Flows and Balances - . units of measure. btu – amount of energy required to heat one pound of water, one degree

Chapter 7 - Potential energy and energy conservation - . learning goals how to use the concept of gravitational potential