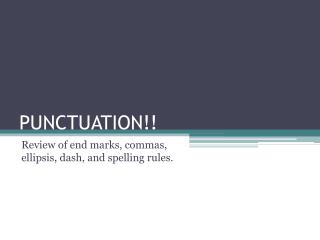 PUNCTUATION!!. Review of end marks, commas, ellipsis, dash, and spelling rules. END MARKS.!?. An end mark is a mark of punctuation placed at the end of a sentence. The three kinds of end marks are the period , the question mark , and the exclamation point.

Punctuation for College Writing: - . a cast of characters. goals. learn the names and functions of standard american

DGP – Sentence 4 - . day 1 punctuation and capitalization. sentence. both breck and jolie drived there cars four a

Commas #1 – Dates and Addresses - . “the pause that refreshes”. why do we use commas? . commas are a type of

L62.a - . demonstrate command of the conventions of standard english capitalization, punctuation, and spelling when

Sentence Structure: Sentence Types - . a sentence. must have a subject and a verb (predicate) must have a complete

Legal Research &amp; Writing LAW-215 - . legal writing skills part one: the basics. why the mechanics of writing are

Context Clues - . a most important skill to master!. the 6 types of clues. pagers= mnemonics (memory) device

Punctuation - . full stops and ellipses. the great saxophonist john coltrane was troubled because his solos were running

Vocabulary Sentences - . every single word must be spelled correctly to earn credit for the sentence. each sentence must

Participial Phrases - . a participle is form of a verb that ends in –ing (present participle) or –ed (past participle

DGP – Sentence 15 - . day 1 punctuation and capitalization. sentence. i like the fact that anne sexton uses descriptive

Punctuation! - . commas. series. use a comma to set off items in a series. example: the flag is red, white, and blue. do

PUNCTUATION - . making your mark!. end marks. periods (.) – use at end of a statement and after an abbreviation.