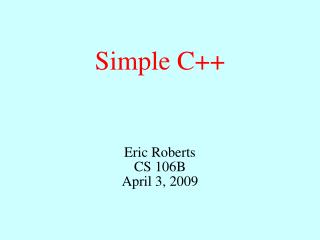 Interests in Land - . possessory interests. a. freehold estates 1. the fee simple absolute 2. the defeasible fees (a)

Simple Machines By: Ms. Nowak - . a simple machine is often used to make work easier. . machines with few or no moving

Simple Circuits - . a simple circuit contains the minimum things needed to have a functioning electric circuit. a simple

Simple Interest - . goal: students will learn how to complete problems with simple interest. g. where have you heard the

PRESENT SIMPLE - . it ‘ s always like this. always. on mondays. never. once a week. sometimes. every day. often.

Section 3:The Simple Present - . by: areej dawoud. examples. i play tennis every day. the sun rises from the east. the