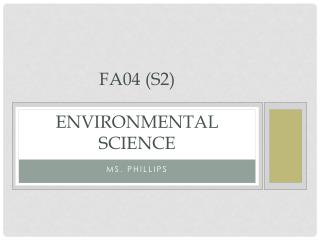 FA04 (S2) Environmental Science. Ms. Phillips. The water cycle is the ____. the evaporation of water from Earth’s surface distribution of drinking water on Earth the recycling of water after industrial use unending circulation of Earth’s water supply none of the above. Answer:

ENVIRONMENTAL SCIENCE Exam I Powerpoint - . environmental science is the study of how the natural world works, how we are

Environmental Science - . unit 7 – energy (ste 7th ed. chapter ##). in the long run, humanity has no choice but to

CE 380 - . environmental science and engineering. assignment. write on a piece of paper your name and your answer to the