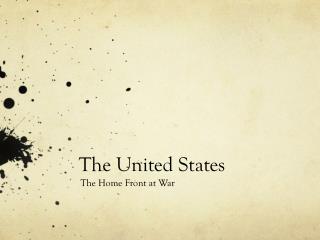 The United States . The Home Front at War. Racial Segregation and the War. 15 million in the armed forces 1 million were African Americans Marine Corps By the end of the war had 17,000 “leathernecks” enlisted Air Force Trained black officers as pilots (80 Distinguished Flying Crosses). Slavery in the United States - . what is slavery?. slavery (definition). social institution defined by law and custom as

Chapter 27 - . reproduction and embryonic development. baby bonanza the increased use of fertility drugs has caused an

United States Regions - . essential question: how do people interact with the environment and what are some of the