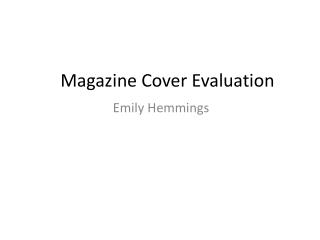 Magazine Cover Evaluation. Emily Hemmings. x. When choosing a magazine appropriate for a certain film it is critical that you choose the magazine which links to the genre or theme of the chosen film. Magazine cover - . by f abienne marshall. brief. the aim of this project was to create an image to advertise the local

Magazine cover analysis - . what you would normally see on a magazine cover:. the whole cover will normally include: main

Music Magazine Cover - . pitch of ideas. genre. music that’s in now the genre for my music magasine will be music

Designing a Magazine Cover - . introduction. when you pass by the magazine rack at wal-mart, what makes you want to pick

Kerrang! Magazine cover analysis - . layout. the centre of the cover features the subject of the main article in the

Music Magazine Cover - explained - . by carys norfor. masthead. after looking at many magazines, and after my first