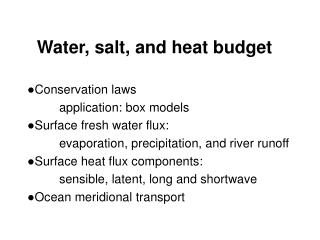 Reflections on Opening Session SA-EU Dialogue on Water and the Sector Budget Support Programme - . the paradoxical

The thermodynamic equation for seawater - . where. is the irreversible internal energy fluxes driven by temperature

Water Conservation in SMEs through - . small and medium enterprise. importance of water in the manufacturing processes.

EVAPORATION - . when heat is transferred to liquid water and causes the molecules of h2o to move rapidly and spread

Evaporation - . model 1 the complete evaporation of 5 mol of water is displayed in a rigid, closed container. the energy

Much of the world’s fresh water is unavailable to us because: - . it is in deep and inaccessible aquifers it exists in