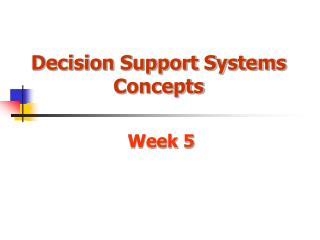 Decision Support Systems - . an introduction to dss with environmental application examples. what is a dss ?. attempts at

DECISION SUPPORT SYSTEMS - . an introduction…. what concepts are involved?. decision making the nature of decision

Decision Support Systems - Learning objectives. identify the changes taking place in the form and use of decision support