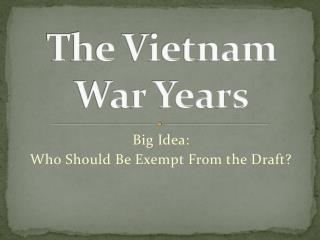 The Vietnam War Years. Big Idea: Who Should Be Exempt From the Draft?. America Supports France in Vietnam. Americas involvement in Vietnam began in 1950. France attempted to rule in Vietnam after WWII. Stop the Spread of Communism. France needs the help of the U.S. The Vietnam War Years - . who should be exempt from the draft?. moving toward conflict. main idea to stop the spread of

Vietnam War Years - . ms. garratt chapter 22:. origins of us involvement. us put pressure on allies to get rid of

Chapter19: The Vietnam War Years - . 19.1: going to war in vietnam. the united states tries to control the spread of

THE VIETNAM YEARS - . chapter 22. you can kill ten of my men for every one i kill of yours. but even at those odds, you