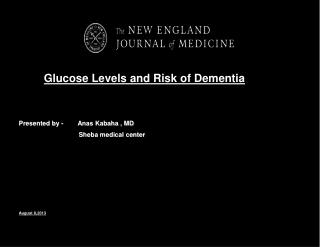 Glycolysis - . anaerobic degradation of glucose to yield lactate or ethanol and co 2. learning objectives. sequence of

Glucose Control: What, Why, When, and How - . terry p. clemmer, md salt lake city, utah. what are the options?. no

High Risk Neonates - . presented by ann hearn rnc, msn. t he high risk newborn. a high-risk newborn is one who is

Dementia - . understanding the condition &amp; improving quality of life by changing how we do what we do!. dementia

Delerium, Dementia and Insomnia - . 14 th feb 2006. delerium. delirium - “to go out of the furrow”. acute confusional

Diabetes Mellitus - . physiology of energy metabolism . all body cells use glucose for energy. to maintain this constant

Factorial Analysis of Variance (ANOVA) on SPSS - . practice reproducing the analyses yourself: 2 factor between (2 levels

Inhibition of Alpha-Amylase and Alpha-Glucosidase by Bioflavanoids: In Vitro and In Vivo Studies Anneke Tucker Dr. Me