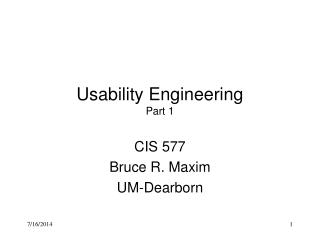 Scientific Underpinnings of Usability Engineering - . february 5, 2004. objectives. after this class you will be able to

Improving Website Usability - . what is usability?. a measure of the quality of interaction between a person and a

Usability - . when you design the userinterface to a computer system, you decide which screens the system will show, what

Usability &amp; Usability Engineering - . usability. what is usability easy to use? user friendly? a system with a