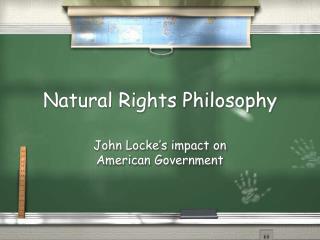 Understanding Natural Rights Philosophy - . the work and influence of john locke. purpose. introduce students to the

Natural Rights Philosophy Vs Classical Republicanism - . what are the main attributes of both views?. natural rights

Animal Rights Philosophy - . do animals have rights? conflict and negotiation: who has rights and who decides?. key

NATURAL RIGHTS - Stressed the rights of the individual; to include, life, liberty, property stressed that human nature is

Philosophy of Human Rights - . human rights and critical thinking skills. what are human rights?. by asking this question

Revolution in “ natural philosophy ” - . the success of newton ’ s physics had immediate effect on: 1.

Natural Rights and Natural Law - . in the “declaration of independence,” thomas jefferson makes reference to

Natural Rights and Natural Law - . in the “declaration of independence,” thomas jefferson makes reference to

Natural Law - Rights to a child

An Apple on Your Head, Connective Natural philosophy - Attempts to excuse the distinctions and resemblances of males and

Philosophy – Moral Philosophy - . ‘the master said, the man of wisdom is never in two minds; the man of benevolence