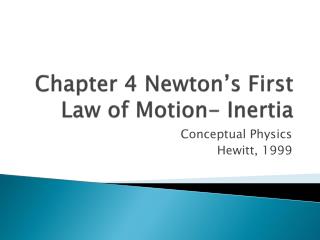 Chapter 4 - Newton’s Laws of motion - . 4.1 force and interactions. a force is a push or a pull. it is an interaction

Newton’s First Law - . the mystery of inertia. aristotle’s laws of motion. the 4 elements will seek their natural

4-5 Newton’s Third Law of Motion - . any time a force is exerted on an object, that force is caused by another object.

Chapter 5: Forces and Newton’s Laws of Motion - . previously, we have studied kinematics, which - describes the motion

Newton’s First and Second Laws of Motion - . chapter 12 section 2. aristotle, galileo, and newton. it took about 2000

Chapter 3 Newton’s First Law of Motion - . aristotle on motion. natural motion not caused by a force objects seek their

Chapter 4 AP Physics B Motion and Force: Dynamics - . dynamics is the study of force and its effect of motion. a force is

Newton’s First Law - . building science champions . in thought. do you believe this picture shows a balanced or

L-6 – Newton's Second Law - . objects have a property called inertia which causes them to resist changes in their