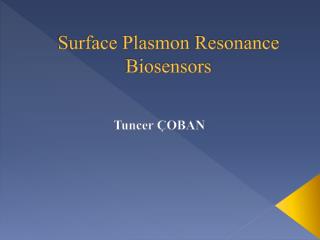 Biosensors - By dominic lanni . biosensors. part one. overview of biosensors. introduction. what are biosensors? a device

SURFACE PLASMON POLARITONS - . spps. pioneering work of ritchie (1957) propagate along the surface of a conductor

BIOSENSORS - . a biosensor is an analytical device which converts a biological response into an electrical signal. the