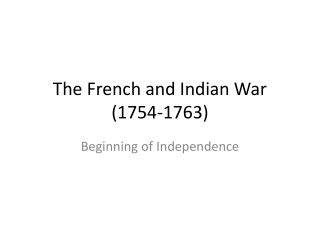 From Empire to Independence: 1754-1776 Part I - . an overview of the issues that led to independence. the british and

The causes of the French and Indian War and its consequences - . by natalie, jess, tamara, sarah and kasu. the seven

Road Map to Independence - . french and indian war. (1754-1763) fight against the french on the american frontier very

Unit 3 Revolution in Georgia Chapter 5 From Royalty to Independence - . events along the road to war . navigation acts

S can read your copy of ‘The Dictionary’ (both sides) - . find one key word that you do not know and learn the