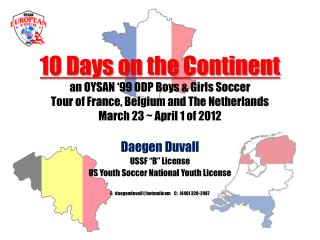 LICENSE LAW - The fined, the suspended. and the revoked. license law. today’s topics. the auditor dropped in. meet an

CC200 Youth Justice - . the rise and fall of delinquency chapter one. the public issue. over the last twenty years, youth

This work is licensed under a Creative Commons Attribution-NonCommercial-ShareAlike License . Your use of this

Starting a US Youth Soccer TOPSoccer Program - . establish a start-up group. don’t need to do it alone, there’s

Meeting the Educational Needs of Children and Youth Who Are Homeless or in Foster Care - . who are the children and youth