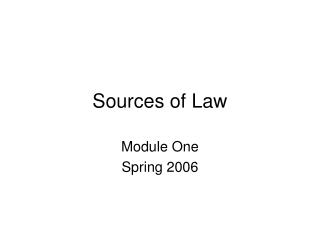 Sources of law - . judicial precedent. what you need to know. stare decisis – stand by what has been decided ratio

Sources of Law - . chapter 2. what is the purpose of the law?. laws sets standards that govern our conduct—let’s us

SOURCES OF LAW: LEGISLATION - . how are the laws made in the uk?. predominant sources of law in the uk are:. primary

Sources of Zimbabwean law - Introduction . zimbabwe's law is mainly uncodified with the exception of criminal law. there

Concept of Law and Sources of Law - . law is a social science grows and develops with the growth and development of