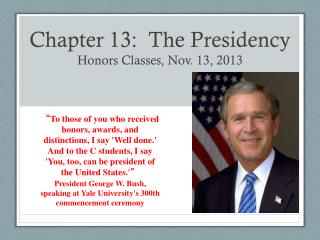 The Presidency in Action - . chapter 14. the changing view of presidential power. article ii of the constitution is

Chapter 12 “I Can Statements # 1-14” - . washington takes the oath of office. washington’s presidency. received all

Chapter 13: The Presidency Section 5 - . objectives. describe the features of the presidential campaign. explain how the

Lithuanian Presidency agenda Status Quo - . meeting of the chairpersons of the committees on social affairs and labour

Chapter 8 – The Presidency - . origins and rules. how does this cartoon illustrate nixon’s comment that “those on

Chapter 14: The Presidency in Action Section 1 - . objectives. explain why article ii of the constitution can be

16 December 2013 English I Honors - Objective : swbat assess characters by examining their actions and decisions within