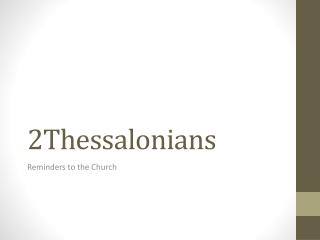 2 Thessalonians. Reminders to the Church. Introduction & Background. Written by Paul, probably in response to something that happened to lead the congregation astray 2 nd letter repeats many of the same themes, but with further explanation… Different outcomes for believers and non-believers Chad Vandiver - . level 4. modeling. “and so you became a model to all the believers in macedonia and achaia. the

THE BLACK AWAKENING - . coming chaos. 1 www.shatter the darkness.net. they say it is coming. an unleashing of hell on

Building Fences - . setting foundations. god wants you to be holy, so you should keep clear of all sexual sin. - i

BUT YOU ARE NOT IN DARKNESS SO THAT THIS DAY SHOULD SURPISE YOU LIKE A THIEF! - . 1 thesalonians 5: 1-4 part iii. the

Come Thou Fount Words by Robert Robinson, Music by John Wyeth - “but we were gentle among you, like a

“Connecting Terms of the New Message” Part 4 “Beyond the Token Age” - . ii thessalonians 1:4 we get our reward in