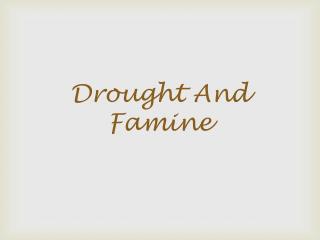 Famine In Ethiopia - . the cycle of famine is fueled by the government’s unnecessary spending, overpopulation, and

Drought and Famine data in EM-DAT - Centre for research on the epidemiology of disasters - cred. drought and famine data

What is El Nino and will it end our drought? - . what has caused the drought?. we have been experiencing drought INcontext Ministries www.incontextprayer.webs.com - The need in the world today is overwhelming .  poverty, famine,