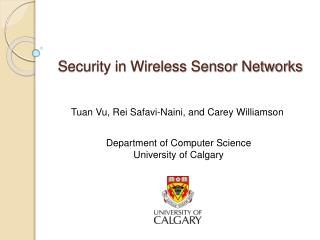 Secure Routing in Wireless Sensor Networks - . this paper. one of the first to examine security on sensor networks prior

Security for Sensor Networks: Cryptography and Beyond - . david wagner university of california at berkeley in

Wireless sensor networks for CPS - . 1. introduction. in the past two decades, wireless communication and network has