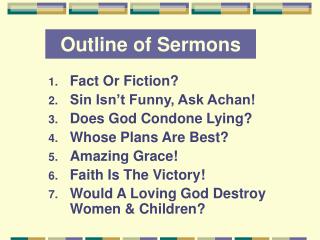 Outline of Sermons - . fact or fiction? does god condone lying? amazing grace! 1. faith is the victory! 2. would a

STEED’S SERMONS - . this powerpoint based sermon is an example of the material being developed by tom steed and being