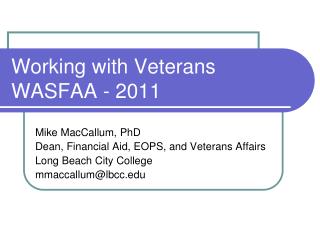 The Indiana Department of Veterans Affairs presents… - . a salute to the hoosier veterans lost in the global war on

The Department of Veterans’ Affairs - . an overview. department of veterans affairs— “to care for him who shall

WORKING UP SOMETHING TO SAY - Sequencing low-stakes writing assignments to produce a high-stakes project. working up

Instructional Focus Calendars - Icebreaker: stand if you're like me. you were born outside of florida.you like to do

Dear Veteran, Thank you for freedom. Veterans are hipfol . You get to help people. Love, Ayden. - Dear veterans, thank