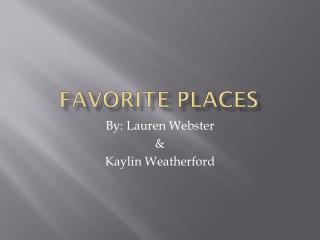 Top 3 Places You Should Must Visit In Tampa, Florida - Tampa is a beautiful city in florida, usa. it has many beaches and 3 Most Visited Places You Can Opt For Birthday Celebrations in CP, Delhi - Here are innumerable partying places in delhi 10 Best Places to Visit in Jammu and Kashmir - Words fall short to describe the beauty of jammu and kashmir. one always

Best Popular Tourist Places in Spain - There were many amazing places around the world, where you can feel the serenity

What are the best places for Singapore nightlife fun? - Singapore is a country that is enjoyable during the daytime as

My Favorite Things - . michael ruiz. my favorite animal. it soo big dog to see. my favorite game. you can buld stuff mike

MY FAVORITE - . philosophy. a man with one watch knows what time it is;. a man with two watches is never quite sure.

My Favorite Place - . do not use the name of the place you are describing in the poem. your first version of the poem

What is your favourite holiday destination? - . to learn a new culture. to watch attractions. to visit new places.

My Favorite place to visit The Walt Disney world resort! - . the first theme park opened was the magic kingdom. it opened