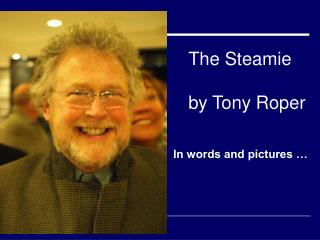 The Steamie by Tony Roper The Steamie by Tony Roper . In words and pictures … . Glaswegian women wash laundry at one of the municipal wash-houses known as "steamies". Normally connected to public bath-houses, steamies were used by the city's residents who lived in one- or two-roomed.

The Steamie by Tony Roper

A Summer’s Trade - . day 3. concept talk . why do people make sacrifices for others?. partner share. how would buying

“ I ” Kids Youth Today: Who Are They? - . the roper youth report presentation prepared for the boy scouts of america

Excitation of the Roper Resonance in Single- and Double-Pion Production in NN collisions - . nstar, bonn 2007. heinz

Scottish Contemporary Theatre - . a comprehensive review of. the steamie men should weep tally’s blood. ‘men should

Past Tense - . 過去式. mary: hi, tony. you look great. how was your weekend? tony: busy but happy. mary: what did you