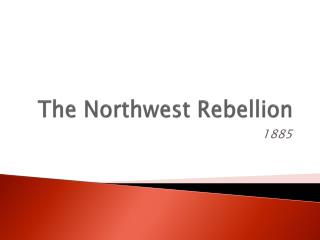 The Northwest Rebellion. 1885. By 1885, settlers had begun to arrive across the prairies. Metis who had left Red River, to settle in Saskatchewan began to feel as though they would lose their lands all over again.

Whiskey Rebellion - . 1.) american farmers were producing whiskey to sell. reasons: a) easier to transport b) income

The Red River Rebellion of 1870 - . red river rebellion. please get out your notes you are responsible for taking

The Northwest Rebellion of 1885 - . the métis wanted to gain title to the land they occupied, and they wanted some

The Prairies 1870-1896 - . intro. this chapter will focus on the story of the cpr, and the treaty process pursued by the

The Northwest Coast - . u1l7. the northwest coast. what is the purpose of a potlatch? to celebrate a marriage to

Louis riel and the red river rebellion - . manitoba joined confederation in 1870 not a smooth entry – fighting between

Northwest Tree Octopus - . this species is relatively unknown, however, there is a lot of information on the following

The Whiskey Rebellion 1794 - . what was it?. a new tax was passed on farmers who sold their grain in the form of whiskey.

Three Kinds of Rebellion - . text: book of jonah. theme – mercy of god purpose – to show the love of god and the fact

On the slopes of Iran - Skiers carve up the powder at dizin ski resort, northwest of