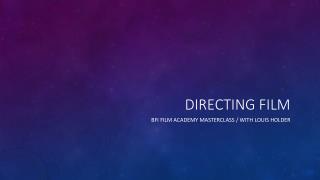 Directing film. Bfi Film academy masterclass / with Louis holder. Introduction to programme. WELCOME YEAR 9 STUDENTS! THE DIRECTING MASTERCLASS BEING RUN IS ONE OF THREE MASTERCLASSES TO BE RUN BY THREE OF THE BFI FILM ACADEMY’S RECENT GRADUATES, WHO ALL IT HAPPENS GO TO TWYFORD! How to Read a Film - . 3 ways to read a film. literary aspects – the elements that film shares with literature. plot,

Unit 4 Unforgettable Films - . film is life with the dull bits cut out . period 1. getting ready 1. match the following

From Film to the Internet: 35 years of cartographic animation - . michael peterson geography - university of nebraska

Radiographic Film Artifacts - What is an artifact?. any optical density that is not anatomyan unwanted density on the