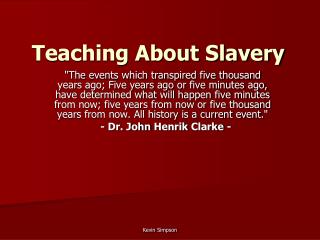 Teaching about Audit - . and making it fun!. are you sitting comfortably?. does it matter? why?. a bit of educational

Teaching About Thanksgiving! - . pilgrims!. the pilgrims came to america on the mayflower! they did not have any food!

slavery - States' rights. slavery. the presidential election of 1860. the southerners threatened to secede from the

Slavery - . chapter 8 -sectional conflict intensifies * the territory gained by the us in the mexican-american war

Slavery - . by: terina wisdom. the video about slavery. .

Slavery - . by: kristin sluyk &amp;jason perrone. how it all began:. the first africans in america arrived in