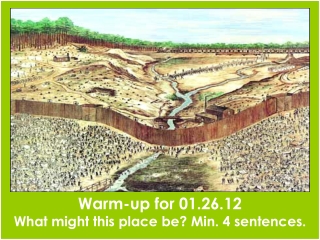 Sentences - . sentences. objective  by the end of this section you will be able to: identify the different parts of a

Warm-Up Sentences - . golf balls used to bee little feather pillows maid of leather in the 1700s and 1800s in peru

Warm Up 2/15/11 Please answer in complete sentences - . if one side of a dna strand has 11 adenines how many thymines are

Grammar Warm Up - . directions: take each set of sentences and combine them into two compound sentences using the rules

WARM UP - . the earth’s movement: putting it all together in at least 3 complete sentences: explain how the earth’s

Warm-Up – Write the sentences down and label the clause – adverb or adj - . the student, who studied hard , made an

Warm Up: - . in the writing section of your journal write what you know about the following: complex sentences

THERE IS NO PLACE LIKE HOME - . the theme of our lesson is “my house”. today we will do: 1. we will read words and

Warm-Up Instructions - . answer in complete sentences. write at least 3 sentences. be sure to explain your ideas. put 5