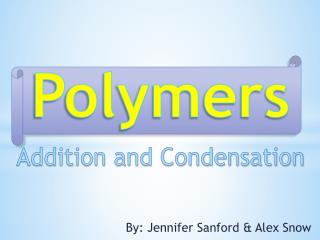 Polymers. Addition and Condensation. By: Jennifer Sanford & Alex Snow. What is a Polymer?. Polymers are substances that have high molar masses and are made of a large amount of repeating units of monomers ( ethene , tetrafluoruoethene , etc.). by Alex Ellis - . laser is an acronym for:. l ight a mplification by s timulated e mission of r adiation. but what does

Selected by: Alex Foreman - War. selected by: alex foreman. introduction. when you think of war, what comes to

Sanford wins - Former governor mark sanford rebounds from a sex scandal to a seat in the u.s.

By: Jennifer Spinka - . overview: . coach was founded in 1941 as a family-run workshop in a manhattan

By Alex Grubka - . ingredients . allantoin — helps with moisturization as it softens, plus helps heal chapping. aloe

By Jennifer Lindaman - Computers a-z. by jennifer lindaman. objective . i design a computer for home and office you can

By : Jennifer Snyder - Molly pitcher. by : jennifer snyder. her early

By: Jennifer Travis - Tropical rainforest biomes. by: jennifer travis. where are the rainforests found?. central america

By Jennifer Alvarez - Microwave technology:]. by jennifer alvarez. how i learned about this technology. when i was a

By Alex Toumazou - How did you use media technologies in the construction and research, planning and evaluation stages?.

By: Alex Bouthillette - . computers today. the first computer was made by. the old computers. the standard computer.

By: Jennifer R. Tabaniag - . many objects around us illustrate angles. a geometric figure formed by the union of two