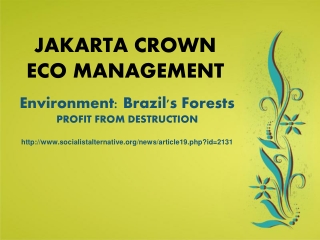 The Future of our Forests: Clarifying the Debate… - . we all agree that forests are important…. why?. water and

Forests - . forest covers 30% of available land. 90% of known species live in forests. 80% of virgin forests have been

Pollution And The Environment - . environment-all of the living and nonliving things around you. local environment people

Brazil - . what is brazil like?. 4th and 5th class. where in the world is brazil?. task 1. locating brazil do the