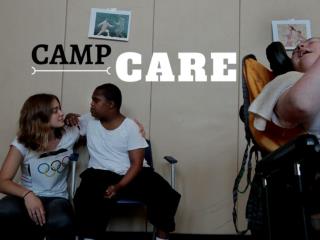 Finding safe, enriching, and affordable summer camp for typical children is often a challenge for parents. But for children with complex physical, behavioral, and intellectual needs, that search is even more difficult. At Franciscan Children’s in Brighton, several weeks of summer camps are offered so that children and families feel supported year round. “Just because a child can’t stand independently doesn’t mean they shouldn’t get to hit a baseball,” says Franciscan CEO John D. Nash. “We’re about focusing on possibilities, not the child’s limitations. Youth Camp - A Whale of A Tale - Creative youth ideas - “who do you say that i am?”. camp bible study series. great

Life of a prisoner at Camp Sumter (Andersonville Prison Camp) - . by: jonathan rodgers. this is the north gate. captured

CARe Reinsurance Boot Camp on Pricing Techniques - 2. . the views and opinions expressed in this presentation are solely

CAMP! - Port waikato camp 2009. camp!. by jacob pilkington and connor montgomery. rules!. dont go on the grass in the

Importance of Summer Camp - Summer camp is one of the most rewarding & memorable experiences for kids. in math summer