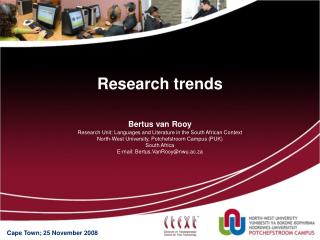 Research Trends - .  how has  social media  and the  internet  affected the  marketing and sales  of the  music

Trends in Assessment Research - “ although large-scale, legislated assessments receive the most attention, classroom

Trends in LIS Research - . most downloaded lisr articles, jan-july 2008. the gap between theory and practice: a study of

Research trends, process and questions - . some trends in ts research introduction to the research process focus on